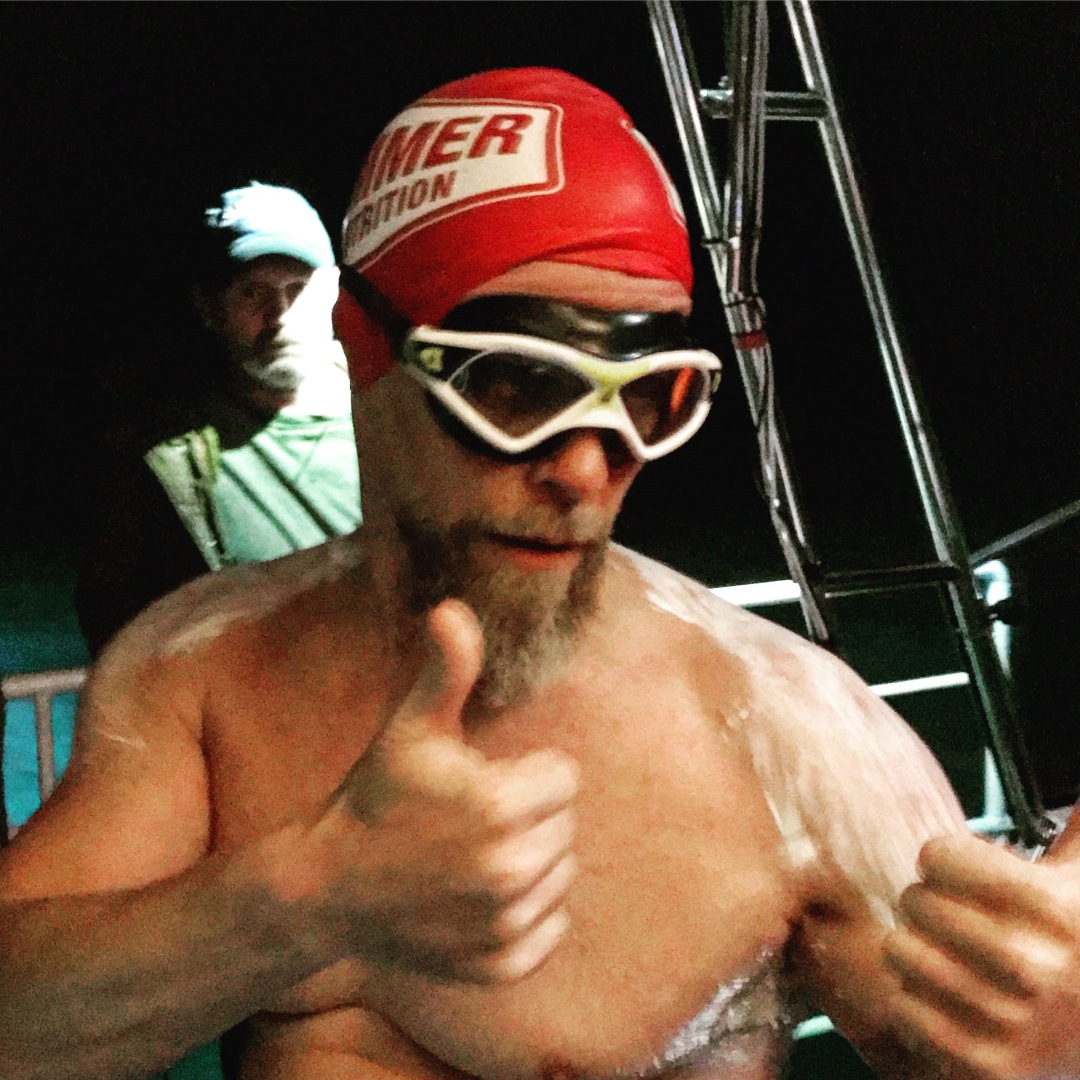 September 17th, 2018. We started the morning with boarding the boat at 2 am. I had been moved up from the #3 spot to #1 spot since there was a storm coming and I had the speed to make it across before it moved in.
The ride out from the harbor got a little bumpy right off the bat and I thought to myself, “this is going to be a long day”. When we got to the spot where I was going to start I climbed down the ladder and jumped in the water. It was warm and nice and with the waves in my back I swam in to shore.
I got there and got out of the water so my feet where clear and raised my arm to signal the boat and off I went. Since it was completely pitch black I only had the lights on the boats to go by and it felt fine. However now the winds were coming from my front right side and I have to say it was a little bumpy, 14 knots.
I tried to settle in to my groove but it was hard. First of my eye sight at night is not very good so I couldn’t see how far away the boat was. I saw the lights but I couldn’t determine how far away they were. Maybe just old age, who knows? I swam in to the boat a few times and decided to swim a little further out. But that caused another problem, now I didn’t have the protection from the boat. I started to swallow a lot of sea water which was the start of the end of this swim.
After 2 1/2 hrs of swimming, I was really struggling. It was still dark and I had swallowed a lot by now. Tracy asked me if I wanted to have her swim with me and I said yes please.
While being tossed around and swimming away from the boat at one point I did see something really cool. The sun was starting to peak over the horizon and it started to light up the cliffs of Dover. It was majestic, it was just like they were glowing in the dark.
When Tracy and I were swimming I did mention the fact that it was getting a little harder for me to breath and my throat was really sore. But I kept on swimming hoping the winds were going to die down a little. In fact they had. I found out later that it was down to 8 knots but too much damage had been done in the first 3 hrs in the dark.
I never found my groove at all and felt very stiff in my stroke. It was a hard swim but it was the only window I had for the rest of the week.
I did manage to get into the first shipping lane before I called it. It was close to 9 miles in about 4 hrs, that turns out to be a 1:30 min ish/100 yard pace. So I have the speed, just not the luck on this one.
Everything else worked out great. Eddie with his crew did a great job with the boat. Amy, my lovely wife and Tracy did wonderful on the boat to motivate me to keep on going and with the feeds. My feeds from Hammer Nutrition worked just as planned and I felt really good of everyone in my crew.
I want to say thank you for all the kind words that I have received before and after this swim.
I will end this note with this. I will come back, I will swim the Whole channel, I WILL SUCCEED in swimming to France!

View all posts by Anders Jakobsson, the "Swedish Swimmer"